Dear reader, I bring to you in my sleep-deprivation only a short and hurried post this week, for I have just returned from conquest.

A month ago I mentioned a little deadline I had imposed upon myself. That deadline was February 7. And I, dear reader, have emerged victorious.

(Actually, I technically finished at 3:30 AM February 8, but that’s beside the point.)

I now have a solid framework for the story in place, and it took a few epochs shorter than I previously estimated. In the next week or so I’ll be fleshing it in and writing all those necessary interstitial scenes that breathe life into characters and carry the plot to its various checkpoints and generally make the book flow seamlessly and keep the readers from scratching their heads and wondering what just happened.

I wasn’t initially planning to write the story this way, but I think this method will work out really well for a story of such monstrous proportions as this one. For one, it’s less intimidating this way, and by laying out the roadmap from the get-go I can avoid chasing rabbit trails and derailing the story. The plot is streamlined—at this point, excessively so, but looking at the story from a bird’s-eye-view will, I hope, enable me to see what additions are truly necessary. So perhaps in the revisions I won’t have to kill quite so many of my darlings.

At least, that’s what I tell myself so that I don’t dwell on the fact that I’ve so far written less than 25% of my  projected wordcount for the final draft. A lot of those additional words will come in later drafts, though, once I’ve done more research on the nitty-gritty aspects of life in that era to make the story come alive.

For now, though, I have sleep to catch up on, scenes to write, and 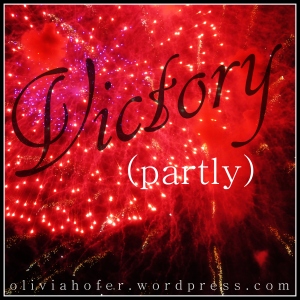 a conference to prepare for.

Tell me, dear reader, what are your recent accomplishments? How do you go about outlining, writing, revising, and researching?

One thought on “Victory (Partly)”