It’s always encouraging when we find that some other mind through the ages had arrived at a conclusion similar to our own, so when I stumbled upon a letter by Thomas Jefferson in response to a request for book recommendations, I was delighted to read his take on the pleasure and purpose of fiction. Who knew one of the United States’ founding fathers and its third president was an advocate of fiction-reading? (I didn’t.)

We never reflect whether the story we read be truth or fiction.

Below is the relevant portion of the letter. Punctuation and spelling are unaltered from the source, though I inserted a few line breaks of my own for the sake of the modern reader whose eye wearies to read the monstrous paragraphs of our forefathers.

A little attention however to the nature of the human mind evinces that the entertainments of fiction are useful as well as pleasant. That they are pleasant when well written every person feels who reads. But wherein is its utility asks the reverend sage, big with the notion that nothing can be useful but the learned lumber of Greek and Roman reading with which his head is stored? 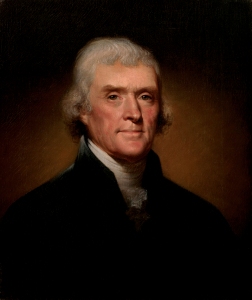 I answer, everything is useful which contributes to fix in the principles and practices of virtue. When any original act of charity or of gratitude, for instance, is presented either to our sight or imagination, we are deeply impressed with its beauty and feel a strong desire in ourselves of doing charitable and grateful acts also. On the contrary when we see or read of any atrocious deed, we are disgusted with it’s deformity, and conceive an abhorence of vice.

Now every emotion of this kind is an exercise of our virtuous dispositions, and dispositions of the mind, like limbs of the body acquire strength by exercise. But exercise produces habit, and in the instance of which we speak the exercise being of the moral feelings produces a habit of thinking and acting virtuously. We never reflect whether the story we read be truth or fiction. If the painting be lively, and a tolerable picture of nature, we are thrown into a reverie, from which if we awaken it is the fault of the writer.

I appeal to every reader of feeling and sentiment whether the fictitious murther of Duncan by Macbeth in Shakespeare does not excite in him as great a horror of villany, as the real one of Henry IV. by Ravaillac as related by Davila? And whether the fidelity of Nelson and generosity of Blandford in Marmontel do not dilate his breast and elevate his sentiments as much as any similar incident which real history can furnish? Does he not in fact feel himself a better man while reading them, and privately covenant to copy the fair example?

I answer, everything is useful which contributes to fix in the principles and practices of virtue.

We neither know nor care whether Lawrence Sterne really went to France, whether he was there accosted by the Franciscan, at first rebuked him unkindly, and then gave him a peace offering: or whether the whole be not fiction. In either case we equally are sorrowful at the rebuke, and secretly resolve we will never do so: we are pleased with the subsequent atonement, and view with emulation a soul candidly acknowleging it’s fault and making a just reparation.

Considering history as a moral exercise, her lessons would be too infrequent if confined to real life. Of those recorded by historians few incidents have been attended with such circumstances as to excite in any high degree this sympathetic emotion of virtue. We are therefore wisely framed to be as warmly interested for a fictitious as for a real personage.

The field of imagination is thus laid open to our use and lessons may be formed to illustrate and carry home to the heart every moral rule of life. Thus a lively and lasting sense of filial duty is more effectually impressed on the mind of a son or daughter by reading King Lear, than by all the dry volumes of ethics, and divinity that ever were written. This is my idea of well written Romance, of Tragedy, Comedy and Epic poetry.

The whole letter, including Jefferson’s list of recommended reading, can be found here. (Fair warning: His recommendations may cause an acute sense of inadequate education and generally make you feel like an underachiever entirely unqualified to create anything remotely resembling literature. Such is the fragility of the writer’s own sense of adequacy.)

Tell me your thoughts: Have fictional characters influenced you, consciously or subconsciously? Do you agree with Jefferson’s view of fiction as a tool to cultivate virtue?

3 thoughts on “The Field of Imagination: Thomas Jefferson on Fiction”