You’ve just closed a great book, your heart is bursting with too many emotions to name, and you’re startled to find that the world has still been turning without you.

That feeling is perhaps impossible to adequately describe, but I don’t think I need to—if you’ve ever read a powerful novel, you know it.

Even if your beginning and middle are solid, a lot can go wrong at the end.

How do we give our own readers that experience when they’ve finished our story? There are too many factors at play to cover in one post, not the least of which include an emotionally powerful beginning and middle. That said, even if your beginning and middle are solid, a lot can go wrong at the end that may send the story careening toward the abyss of Books Readers Forget, or at least, Books That Were Really Good But Could Have Been Great.

Much time is spent perfecting openings, and rightfully so. But should we give our endings any less attention? As Donald Maass says:

Whether it is a sigh of satisfaction, a soaring passage of word art, or nothing more than a clever exit line, put the same effort into your last line as went into your first. A book needs front and back covers to hold together; in the same way a novel needs strong brackets to bind it. (Writing the Breakout Novel Workbook, p. 162)

Here are three key elements that go a long way toward making a story unforgettable.

A Pang of Sorrow

No one goes through life unscathed. Why should our characters? You don’t need to write a tragedy, but it’s not realistic when every loose end is neatly tied just as the protagonist might have hoped.

We can all relate, in one way or another, to loss. It gives us a deeper appreciation for what is gained. A sunset is hardly as beautiful when the sky isn’t hung with clouds to catch the light. So it is with stories.

A pang of sadness is also indicative of what the characters have given during the course of the story. To quote Maass again,

…I would like to suggest that there are two character qualities that leave a deeper, more lasting and powerful impression of a character than any other: Forgiveness and self-sacrifice. … As for self-sacrifice, is there a higher form of heroism? It is the ultimate expression of love and as such is about the most powerful action a character can perform. (Writing the Breakout Novel, pp. 121-122)

And sacrifice is hardly sacrifice if the character can walk away as though nothing happened. When a precious lamb is offered on the altar, there’s no getting it back. It’s a pile of ashes. Whatever your character gave up can’t be returned to him in quite the same form. And it hurts.

A Ray of Hope

On the other hand, a story with no hope does not accurately reflect reality, either. Let joy and sorrow contrast and intensify one another. Bittersweetness is more potent than the sweet or the bitter alone. The precise ratio may vary, but an ending that falls too near one end of the spectrum will not resonate as deeply.

Where something ends, something else begins. This is obviously true of books that lead to sequels, but even standalones and series finales strike a resounding chord in our hearts when the end leads to something more. It might be said that, in a sense, every novel is a prequel, though not every sequel needs to be told.

A sense of closure must be reached, however. Otherwise, you have not reached the end, or even the beginning, but are still stuck in the middle. A new beginning is built on the foundation of what concluded before it.

In the words of T.S. Eliot,

What we call the beginning is often the end
And to make an end is to make a beginning.
The end is where we start from.

Stories that follow this pattern tend to resonate with us because life itself is cyclical. Even the end of the world marks the start of the next.

“…the end of all our exploring
Will be to arrive where we started
And know the place for the first time.” – T.S. Eliot, Four Quartets

Stories also end in a new world, of sorts. In some, this might be the beginning of a safer, better, more peaceful home. In others, the world might be much the same, but our hero’s perception of it has changed.

Even as the conflict is resolved, the resolution will bridge the way toward new opportunities and new challenges. But we know now that the hero has gained the emotional, mental, or spiritual strength to face them.

After all, out of the ashes springs forth new life. And after we close the cover, 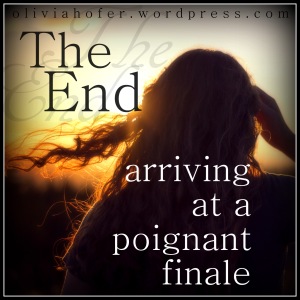 our own lives may never seem quite the same.

Tell me your thoughts: What endings have resonated with you? Do you prefer conclusions that tend toward joy or sorrow, or somewhere in the middle? Has an ending ever changed your opinion of a book or film as a whole?

2 thoughts on “The End: Arriving at a Poignant Finale”