When I’m discouraged or dismayed in my writing, I find peace and take heart not by studying marketing or how to skyrocket to bestseller lists, but by pondering the stories that have woven themselves into the human psyche throughout the generations. 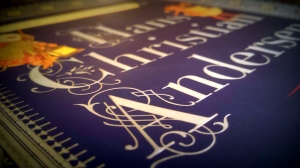 I was thinking these things a few nights ago, as I thumbed through a beautiful new volume of Hans Christian Andersen’s fairytales. And then I read his story, “The Psyche”, which I had never heard of before. It’s a beautiful story, and I strongly urge every creative person to read it.

In it, a young artist creates beautiful sculptures in the evening, but by morning when he looks upon them again, he loathes them and destroys them. His artist friends assure him that he has talent, that he need only finish a project to be recognized among the greats of the age. But he cannot seem to finish anything that he does not destroy in a fit of self-loathing.

Then one day he meets a beautiful maiden. Her beauty and spirit so enchant him, he is overcome by the desire to capture her effigy and works late into the night molding her with clay. And when he looks upon it in the morning, he does not destroy it. It is her very likeness. He sees not his handiwork in the clay, but her beauty. His friends see it and are amazed. And then, by chance, the maiden and her wealthy father happen upon it. They recognize the image immediately, are delighted by it—and the father commissions the young artist to recreate the sculpture in an enduring medium, in marble.

The artist sets to work at once. He is enraptured. Never before has he found such joy and taken such pride in his art. And when it is finished, even more beautiful in marble than in clay, he hurries to tell the father that the work is done, that he will soon reveal the marble sculpture. The father is pleased, and invites the artist to see his daughter. When he does, he is so beside himself with admiration, he hardly knows what is coming out of his mouth. Before he knows it, he confesses his love to her. She is taken aback. She repudiates him. 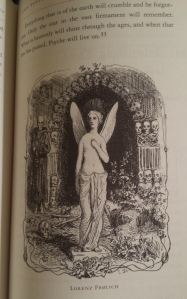 The artist leaves, dejected. He has fallen from the highest high to the lowest low. He raises a hammer to strike down the sculpture, but a friend stops him. Instead he lowers it into a well, buries it with earth and branches, and never looks upon it again.

For the rest of his life, the artist searches to no avail to find meaning. At last he joins a monastic order, but even there is unfulfilled. He dies, and his skull is used along with the skulls of a nameless multitude of monks to build a wall surrounding the monastery, until it crumbles into dust.

Many, many years later, a grave is being dug. The gravediggers hit something hard in the ground, something white, and excavate it carefully. They find a sculpture, dazzlingly rendered in marble, of a beautiful young maiden. It seems almost not to be marble, but a real woman. Everyone who sees it is amazed, is awed, is uplifted by this portrait of beauty and goodness. Who sculpted it? they wonder. There is no way of knowing. They can only assume such handiwork was crafted by one of the greats of old.

The full story can be read here. There are many lessons, I’m sure, that can be drawn from it. The one that most impressed itself upon my heart as a writer is the enduring quality of our work. Long after we are gone, long after our trials and self-doubts have ceased, long after our names and identities are forgotten, what we have written, the stories we told, just may live on to encourage and inspire future generations. What we create matters—and it matters lastingly. We are mere wisps of vapor vanishing on the breeze. The beauty, the goodness, the triumph over suffering we portray, is very nearly—perhaps truly—immortal. But for this to be, we must follow through with our creations.

Perhaps, to write something worth reading, we must … look beyond ourselves.

How do we finish what we start? Like Andersen’s young artist, the greatest hindrance to my production is self-doubt, dissatisfaction and even loathing of the work of my own hands. The artist in the story broke free of this hindrance by his sheer love for his subject. He lost himself in his work—it was not he who was creating, but the woman who was emerging from the marble. When we read, we lose ourselves in the trials and triumphs of the characters. Perhaps, to write something worth reading, we must do the same. We must look beyond ourselves, beyond our own perceived inadequacies and failings, to the eternal, the beauty and goodness, the pain and the suffering and the light that dawns after them. Perhaps we must focus not on writing, but on the love of stories and the truths they tell.

Why did the young artist seek unavailingly for meaning? Because after the maiden rejected him he stopped creating. He was rebuked late in life for squandering his gifts. If the sculpture of the young woman brought so much light into the world when it was discovered, imagine what he could have done if he had continued sculpting.

Yes, let us study the craft and let us study ways to spread our work out into the world. But let us remember that these are means to an end. We seek to accomplish something beyond us and beyond our generation. We seek to capture splinters of glory of the truth that is eternal.

Create, my friends, and take heart when you are dismayed in your work. Story

Tell me, friends, what do you do when you are discouraged in your writing? What do you make of Andersen’s tale? Do you, too, ever fall in the trap of focusing on yourself rather than your subject?

2 thoughts on “To the Despairing Artist”